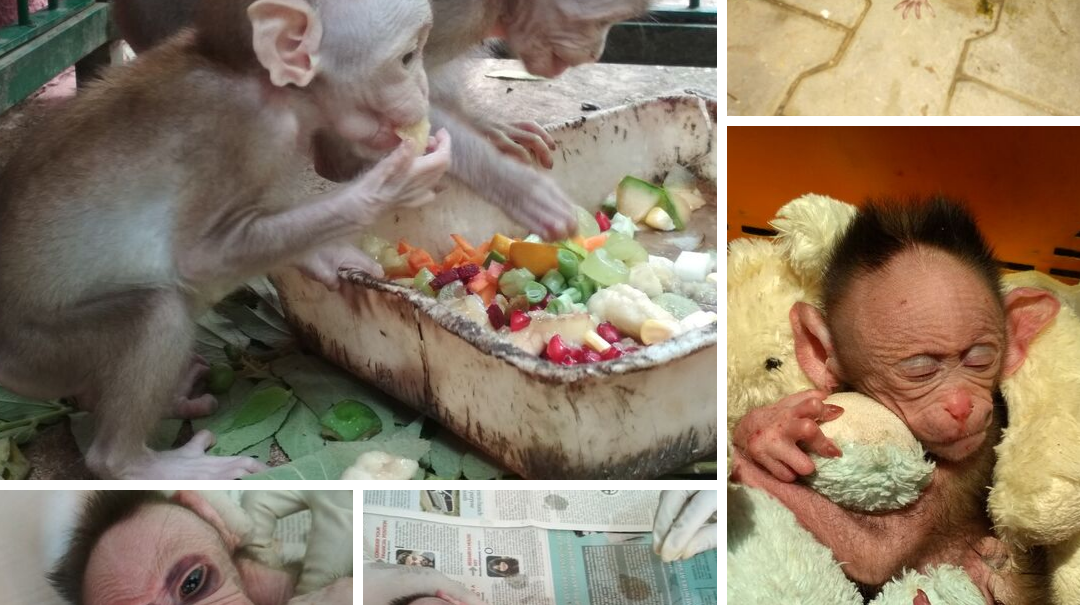 August and September 2019 has been a very busy one for us with a lot of successes and heart-warming stories. Below are some of the highlights.

This newborn female was found at an apartment complex in Arekere, Bannerghatta road, Bangalore. She had fallen onto a concrete surface, apparently immediately 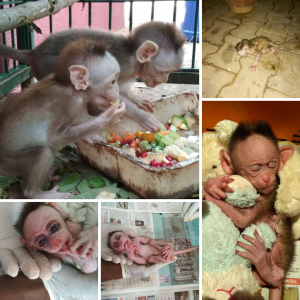 after she was born. When she came in she had a swelling on her head, and both her eyes were badly bruised. The head injury made us worry that she might have permanent brain damage.

She was lucky – she was not seriously hurt, and started suckling from a feeding bottle at once. Very feeble at first, she slowly gained strength till she could sit up by herself, wobbly though she remained.

But at two months, we realised that all was not well – she still could not stand up or walk. We began giving her daily physiotherapy, sun exposure, multivitamin tonic and calcium. Within a week she had improved dramatically. She began getting up on her own (when she thought no one was watching), and even tried to take her first tottering steps.

At 4 months, Nandini (as we’ve named her) is healthy, naughty, playful, and very smart. She lives with Cutie, another baby macaque. The two are firm friends, playing and fighting as friends will do, growing stronger every day.

The next step will be be to integrate Nandini and Cutie with four of our slightly older hand-reared babies. If they bond as we expect, the six will form a troupe. As they grow, we will reduce our interactions with them, so that they depend less on humans and more on each other.

Juvenile White-Cheeked Barbet, brought in after a fall from her nest

The sound of the white-cheeked barbet is familiar around Bangalore. Bright green with pale heads, myna-sized (but plumper, and with large, orange beaks), they 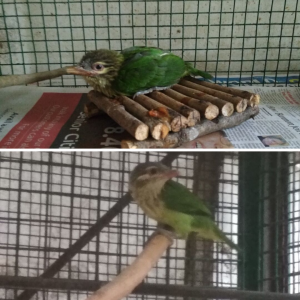 keep up a constant, resonant kutroo, kutroo, kutroo in every season. This young barbet, sex undetermined, was rescued from Basaveshwarnagar,  Bangalore. She had a few superficial wounds, but we had to be alert for internal injuries, which often occur after a fall from a nest.

She had a good appetite. We had to hand-feed her banana and papaya for the first week, after which she was quite happy to eat by herself. After a while, we shifted her to a large aviary to allow her to practice flying.

In about two months, she was flying perfectly, but we decided to keep her a little longer, since she was still a sub-adult and weighed only 70g.

She had other ideas – she had decided she was quite ready for the big outdoors. One fine day, as the keeper entered her aviary to clean, she performed a sophisticated tactical manoeuvre and escaped. We can still her in the trees around the centre – she is doing very well.

These two males, 275g  and 370g, were rescued by the police in Bangalore. These shy, insectivorous, nocturnal primates are caught to be tortured in black magic rituals. The injuries are often horrendous and the animals do not survive.

Luckily these two had no external trauma. We kept them under careful observation to rule out any internal injuries. Both chaps had a good appetite, and ate with relish the cockroaches, beetles and fruit we gave them.

After two weeks of care and observation, they were released inside a safe protected forest at night.

Juvenile Indian Mynas, too young to fly, found on the ground

One young myna, sex undetermined, had no external injuries when he was brought to us. As everyone in India knows, mynas are gregarious birds, so we were relieved when we got another young myna shortly thereafter.

They were housed together, and being omnivores, they did well on minced meat, insects and fruit. In a week they were eating on their own and trying to fly; so off they went to the large aviary for flight practice.

We released them after three months, after they had been flying well for a while. One of them still shows for a treat once in a while – though it may be both of them taking turns, it’s hard to tell.

These gentle animals have the unfortunate distinction of being the number one poached animal in the world. Though they are fellow mammals, they look like reptiles, with their prominent scales. The scales are the very cause of their decline, since they are used in Chinese and Southeast Asian traditional medicine. The scales, of course, are made from keratin, the same material as your hair and fingernails – and so are no more likely to cure any ailment than chewing your fingernails. But such is the idiocy of our species.

This 9.86-kg adult male was seized by police from wildlife traffickers in Mahalakshmi layout.

We gave him a little raw egg and later put elephant dung from the forest in his enclosure. Dung is a rich source of beetle larvae and beetles, which pangolins relish; though they mainly eat ants and termites (called ‘myrmecophagy’). Being nocturnal, he was generally active after dark, and slept during the day curled up in a ball.

We were optimistic, but luck was against him and us. After 15 days, he became dull and listless and died. A post-mortem, conducted by wildlife pathologist, revealed he had died from a lung infection and septicaemia.

Spectacled Cobra, found in a house, saved from being killed 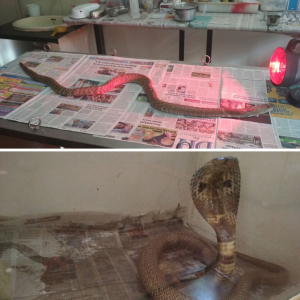 This 780-g adult cobra, sex undetermined, was rescued from Hulimavu, Bannerghatta Road, Bangalore. He had been sleeping peacefully in the sump chamber of a house. The residents, reacting as many people do with fear rather than good sense (or compassion), poured paint thinner over him.

When the snake rescuer arrived, the snake was unconscious and fading fast, so the rescuer brought him in at once.

We found no discernible heartbeat, and the snake had hypothermia (low temperature) and very shallow breathing. We performed CPR (cardio-pulmonary resuscitation), and gave him infrared heat and emergency medication.

After almost an hour of effort, he moved weakly, and revived.

The next day, amazingly enough, he was moving about normally! We released him shortly thereafter in a wooded area at night.